The Guide For Buying a Coffee Maker

If you are on the market for a new coffee maker, it is important to put serious thought into what type of machine that you will purchase. This is something that you will wake up to in the morning, and it will provide you the essential beverage to get you through the day, so you want to be happy with your purchase!

First of all, it is important to decide what needs you have in a coffee machine. Coffee makers have come a long way, and they have a number of different accessories and features for a variety of purposes. In purchasing a new machine, you want to make sure that you get exactly what you want, and also that you get the best deal for the money that you are spending. To determine your needs, first of all, decide how many cups you will need to brew on a regular basis. If you have a family, then you probably need the maximum size of a 12 cup coffee maker. However, if you are single, you may want a personal sized 4 cup coffee maker so that you don't waste any Java.

If you are brewing for a larger atmosphere, like for your family members or in your office, it may be a good idea to purchase a commercial coffee machine for home use. As an example, Bunn makes a number of smaller professional coffee machines that are affordable at around $100, but they work with commercial features to allow you to brew within three minutes at any time. These machines stay plugged in, and the water will continually be heated. The advantage to this is that it allows you to brew within moments whenever you are ready without any heat up time for the machine, and it also keeps the water within the machine hot to prevent bacteria from growing and affecting the other components of the coffee machine.

If you are looking most of all for convenience, you will want to look for a coffee machine that has programmable functions so that you can wake up to coffee in the morning without having to worry about brewing. You can set up a timer and brew your coffee for the time that you wake up, and you can also use this timer to delay your brew if you would like a cup of Joe after dinner.

The last thing to keep in mind with your coffee maker purchase is what type of accessories that you may need. It is always best to freshly grind your coffee beans before brewing, so consider investing in a kitchen coffee grinder or even a coffee maker that has a grinder included. This is a popular new feature with coffee makers on the market, and it saves you money instead of having to purchase two different machines. There are also a number of different coffee makers that are coffee and espresso combination machines if you want the best of both worlds in brewing!

Other than prohibiting GMO's, organic certification prohibits the use of synthetic pesticides and fertilizers. This requirement has many, far-reaching implications and benefits:
Environmental and Health Benefits of Organic Farming

For the farmer, not being able to use synthetic pesticides and fertilizers will require more work, but also involves much more attention to the coffee trees. This close relationship with the crop may result in higher quality coffees. An added benefit for the farmer is not being exposed to toxic chemical residues. This not only helps the farmer, but their family and the community. There have been numerous studies that correlate disease and long-term health problems with exposure to pesticides used in agriculture. Pesticide exposure can be harmful in the best of situations, but in developing countries the outcome can become deadly.

With conventionally grown crops farmers are in a battle to increase production and reduce costs - at all costs. With coffee and other crops there is a history of slashing and burning vegetation. They do this to open up the land to plant coffee in rows for mass production. This results in nutrient rich top soil being washed away, which creates an endless spiral of having to add synthetic fertilizers to grow the coffee. Mass deforestation and organic farming do not go hand in hand. Organic coffee may cost more, but it helps preserve the rainforest and tends to be much higher quality than coffees that cost a few cents less.
Physiological and Quality Benefits of Organic Coffee Production

Many organic coffees are grown at high elevations in shaded conditions. High elevations and shade contribute to a slow developing coffee, especially in the absence of synthetic fertilizers. Coffee beans grow denser and more complex than coffees grown at low elevations in direct sun. Not only does organic coffee production preserve the environment, but results in better coffees!

A couple items that correlate with complex flavor development in organically grown coffees are antioxidant and nutrient accumulations. Some of the complex and intense flavors associated with organic coffee can be attributed to being shade grown*, but there have been numerous research studies that show that organically grown foods contain higher levels of antioxidants and nutrients. There have been other studies that directly correlate better flavor with organic farming practices. Although there have not been extensive studies comparing the phenolic content of organic versus conventionally grown coffees, it stands to reason that coffee would follow the same trend as other organically produced crops. It is well known that coffee contains loads of antioxidants, which may provide many health benefits. It is our belief that organically grown coffees present the best possible solution for easy consumption of these various antioxidants. Not only are antioxidants higher in organically grown crops, but you don't have to worry about toxic pesticide residues or genetically modified organisms.
Conclusion:

Above, I have outlined the major benefits of organic coffee, but for me organic coffee is much more. There are numerous cultural and social implications which come with exclusively roasting certified organic coffees. By going organic we can make the world a better place.

How to Make Delicious Iced Coffee at Home 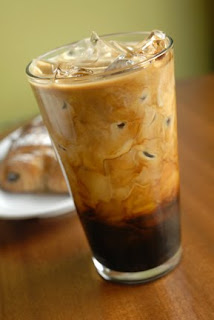 My absolute favorite type of drink is an iced coffee! Iced coffee can be done in a variety of ways and methods, and without a doubt Starbucks knows how to make a great iced coffee. The problem with Starbucks is, it can really break the bank if you make it a regular habit. The great thing is, you can make delicious iced coffee at home, just as good as Starbucks can, without spending a lot of money!

The key to making it is to make it very strong. Personally, I think there is nothing worse, than receiving an iced coffee that is simply hot coffee poured over ice. This is never pleasing because the temperature is typically lukewarm as well as the ice melts. In this case, I would actually prefer to drink hot coffee than a luke warm coffee drink.

There are two methods to making great iced coffee. The first is to simply brew a pot of strong coffee and let it chill in the fridge over night. This is an easy thing to do, but you have to make sure you make the coffee strong enough, typically an espresso roast or very dark roast, and let it cool completely before serving. I have tried this method a few times, but find the following method to be even better than this one.

The second method to making a perfect iced coffee is to brew it the old-fashioned way. In this method you actually add the ground coffee to water and let it steep all night long. You take a large pitcher, add a good amount of coffee grounds, stir in water and let it hang out all night on the counter. Once you have let it steep all night long, you simply want to strain the coffee mixture into a new pitcher the next day with the use of cheesecloth and a strainer. What you have is very dark, rich coffee that is perfect for this summer drink!

After you have made the coffee base in your preferred method, comes the fun part! Making the drink just how you like it. Personally, I love an iced coffee that is made the Thai or Vietnamese way, which is adding a bit of sweetened condensed milk to the drink. This is a great pick me up and sweet treat for a hot summer day. It is also lovely on its own or with a bit of milk and simple syrup!

Posted by Unknown at 9:23 AM No comments: